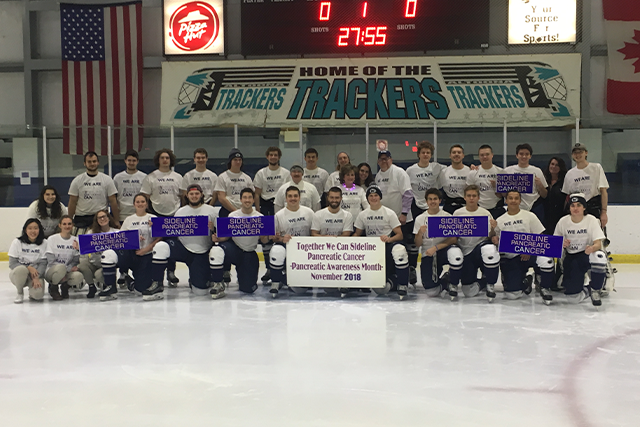 We are very pleased to announce our second annual Purple Puck Night!

On Friday, December 6th at 5:00 PM, the Penn State Nittany Lions will be hosting the Saint Vincent Bearcats at the Galactic Ice Rink in Altoona. (Click here for directions.)

“On Friday December 6, 2019, PSU Altoona and College Hockey East have teamed together with a Hat-Trick of partners, which include the Mario Lemieux Foundation, The Griffith Family Foundation, and Easter for Eli for “College Hockey Combats Cancer” Campaign. The Nittany Lions will play host to Saint Vincent Bearcats in an effort to raise funds and awareness in the battle against cancer. So what is it? Our newest partner is the Mario Lemieux Foundation, and Jordan Curry, who is the program coordinator for the foundation which puts her in charge of events like the “Pittsburgh Penguins 6.6K” and the “Mario Lemieux Fantasy Camp”. Their foundation’s biggest area of need is to connect to a younger generation of hockey fans who know Mario Lemieux was a great hockey player but do not necessarily know his entire story, particularly his battle with cancer. Our second partner is The Griffith Family Foundation, and Cathy Griffith and her signature initiative, which is “SIDELINE CANCER”. “

Click here to read the rest of the article ->