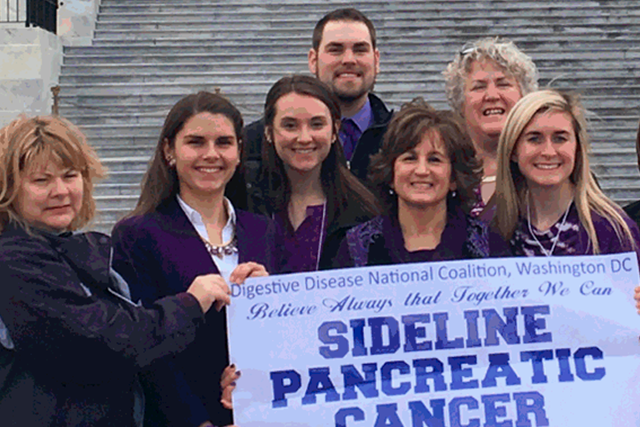 Over 150 patient advocates, gastrointestinal physicians, and industry representatives attended and made approximately 120 visits on Capitol Hill to advocate for the DDNC’s legislative priorities, including federal research funding for NIH and basic patient protections.

Attendees heard from Federal agency representative and key legislative speakers on topics of interest including the most recent advances in digestive disease research. The presentations focused on the three key aspects of the DDNC Public Policy Agenda; research, patient access to care, and prevention and awareness. Dr. Ralph D. McKibbin, MD, FACP, gastroenterologist at Blair Gastroenterology Associates in Altoona, PA is the current President of the Digestive Disease National Coalition in Washington, D.C. Cathy Griffith, President of the Greg and Cathy Griffith Family Foundation/Sideline Pancreatic Cancer Youth Initiative is currently Vice-Chairperson of the DDNC.

Cathy was able to talk about our trip to this year’s forum on We Are Central PA Live. Click on the photo to watch the full interview.

The Griffith Family Foundation would like to thank the DDNC’s Executive Committee, the Board of Directors, and the Health and Medicine Counsel of Washington, D.C. for making it possible to advocate for our legislative priorities regarding Pancreatic Cancer research with the United States Congress and Government Administration.