History of the Griffith Family Foundation 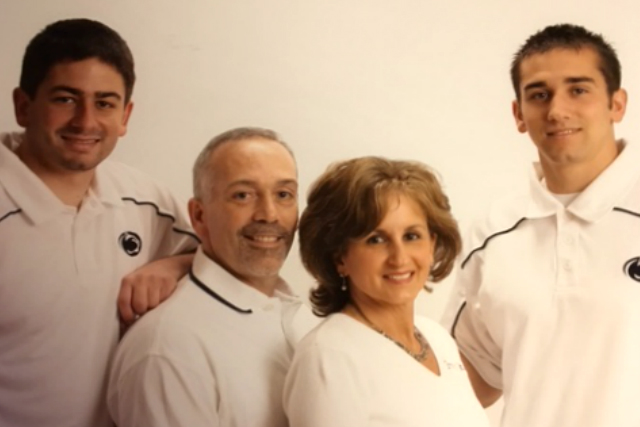 The history of the Griffith Family Foundation is a tragic but inspiring chapter in the story of Greg and Cathy Griffith.

View the Timeline of the Greg and Cathy Griffith Family Foundation

Greg passed at age 50 after a heroic 19-month battle. When he was diagnosed with stage IV pancreatic and liver cancer in the prime of his life, he was told that time was limited. However, on hearing his diagnosis, he said to his doctor “What can Cathy and I do to help you?”

The doctors were amazed to hear this question from a terminally ill patient. From there, a new trajectory for pancreatic cancer had begun with those words spoken by Greg Griffith.

Cathy Griffith is Greg’s wife and the mother of two their amazing sons. She became a widow at the age of 48. It was through God’s love and grace that Cathy was able to remain calm and steadfast in the midst of a ferocious tornado called pancreatic cancer.

It was the idea of siblings, Amanda and Luke Ottaway. At the time, Amanda was a senior at Davidson College and a member of the girl’s basketball team.

Luke was a junior at Villanova University and a close friend of Jamie Griffith, Cathy and Greg’s son.

On Easter Weekend 2010, Amanda and Luke came to Greg and Cathy’s home and presented the idea of having a fundraiser for pancreatic cancer research.

Their Spirit-driven concern led to the idea taking on a life of its own, and a committee was formed and lead by Booker Moore and Brent Ottaway to spearhead the first “Griff’s Run and Gun for a Cure.”

That first year, $30,000 was raised for pancreatic cancer research through the efforts of many in the local community. The success of the event soon led to the founding of the Greg and Cathy Griffith Family Foundation.

The foundation operates on the premise that helping others mends the brokenhearted.

It is Cathy’s desire to use the foundation to help change our world and the outcome of pancreatic cancer by uniting us all in the fight to Sideline Pancreatic Cancer through fundraising to support the research of Dr. A. James Moser.

Dr. Moser is the Co-Director of the Hepatobiliary Pancreatic Cancer Center at Beth Israel Deaconess Medical Center in Boston, MA.

Since 2010, the Griffith Family Foundation has donated $295,000 to the research efforts of Dr. A. James Moser.

One of more encouraging developments of Dr. Moser’s research and partnerships is with Berg, a biopharmaceutical company committed to uncovering health solutions through data-driven biological research.

This particular partnership has lead to an initiative called “Project Survival.”

According to Niven R. Narain, Co-Founder, President and Chief Technology Officer of Berg, this partnership will help significantly in the efforts to detect Pancreatic Cancer earlier so that new treatments can be developed, which will lead to longer survival.

Cathy attended the American Association of Cancer Researchers in Atlanta, GA in December 2013.

She also obtained her certification as an AACR Pancreatic Advocate Scholar.

Dr. Maitra is an expert in genetics of pancreatic cancer and the development of targeted therapies for the disease.

Since the inception of the GFF, Cathy has remained active in the community raising awareness for Pancreatic Cancer and in the Griffith Family Foundation Sideline Cancer® campaign.

She has spoken to the Hollidaysburg Rotary, Caring for Kids With Cancer, the American Cancer Society, Kiwanis, St. Vincent DePaul dinner, the Bob Perks Cancer Assistance Fund, and she continues to speak at many local churches, schools, and universities.

Additionally, Cathy is the Vice-Chair the Digestive Disease National Coalition and is currently involved with the DDNC and the National Pancreas Foundation to create an advocacy platform for Pancreatic Cancer awareness in Washington D.C.

The Griffith Family Foundation has many fundraising and awareness campaigns throughout the year, such as: hosting the Annual Griff’s Sideline Pancreatic Cancer Dinner; sponsoring the Sideline Cancer basketball team in “The Basketball Tournament” (an eleven-member made up of professional basketball players who come together to play in a highly visible, nationwide, single elimination tournament); organizing our annual “Tee Off For a Cure” golf tournament at the Scotch Valley Country Club; and raising awareness with The Good Funeral Home and Alto-Reste Park at “Fund a Cure a Night at the Altoona Curve to Sideline Pancreatic Cancer.” In addition, Sideline Cancer® is another major campaign which has become our signature fundraising initiative!

Tee Off for a Cure

The concept of Sideline Cancer® started with a group of seniors at the Hollidaysburg High School in 2012.

He suggested a name that would reflect all school activities and participation. Sideline Cancer® was then birthed due to his suggestion and a collaborative effort from the Griffith Family Foundation, Jack, and students.