Sideline Cancer Is Getting Love from Amazing Advocates 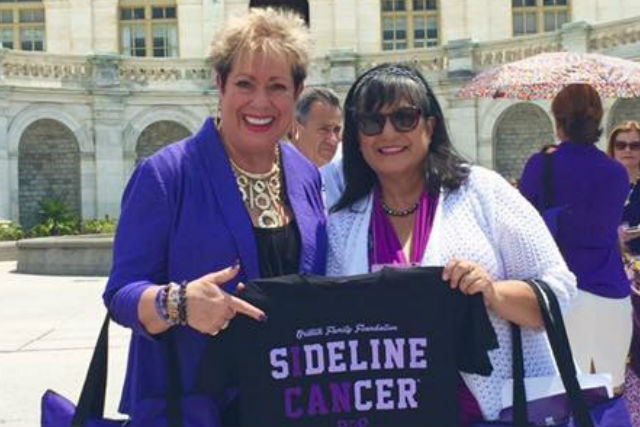 Pamela Acosta Marquardt is the founder of the Pancreatic Cancer Action Network, which is a nationwide network of people dedicated to working together to advance research, support patients, and create hope for those affected by pancreatic cancer. In 1996, Pamela lost her mother to pancreatic cancer following a six-month battle. During that time of struggle, she saw that there was no organization that dealt with pancreatic cancer, so she decided to take action. In November 1998, she produced the An Evening with the Stars gala in Beverly Hills, by rallying and bringing together celebrity families who had lost loved ones to the disease. Event proceeds funded the first early detection lab for pancreatic cancer at The Johns Hopkins Hospital in Baltimore. In February 1999, she founded the Pancreatic Cancer Action Network with the goal of it becoming a beacon of hope for those touched by the disease. (Read more about Pamela)

Grace Zetz is the founder of the Zetz Family Pancreatic Cancer Research Foundation, Inc. Grace is the widow of Matthew “Jim” Zetz who is the inspiration of the foundation. She created the family foundation to help raise awareness and funds to assist with finding a cure along with early detection for pancreatic cancer. Along with other Zetz family members, the foundation will work together with other pancreatic foundations to create the demand for further funding so those struck by this killer disease are left with hope and cure. (Read more about Grace)

Every year, the Pancreatic Cancer Action Network conducts Advocacy Days to help train advocates and volunteers on how to use their time most effectively. They conduct thorough training sessions on what to communicate to legislators. They also inform participants on other topics related to pancreatic cancer through a variety of breakout sessions. These meaningful programs give people the opportunity to learn about the latest in pancreatic cancer research and to connect with other passionate individuals who have been touched by this disease. (Read more about the National Pancreatic Cancer Advocacy Day)